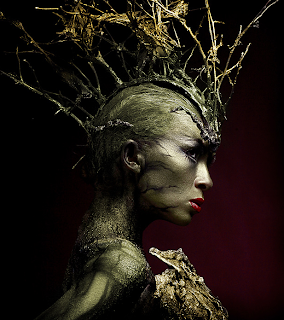 Us party goers like some dark Witches. But could you name your daughter after a Witch that does something really, really bad?

Not to brag, but I played the 1st Weird Sister in a college production of Macbeth. You know the character, one of three witches who's prophecies change the course of Macbeth's life forever. The, "Double, double, toil and trouble" Witches. One of our acting assignments was to give each of our characters a proper name. So imagine my surprise a month or so ago when I found out that the Weird Sisters "official" names are Ursula, Glenda, and Medea. Rats. I picked Niarne.

Medea (pronounced "meh-DEE-ah") is a Greek name that could either mean "ruling" or "to ponder." Out of the three names, Medea is the one with the most unpleasant baggage. Whenever I hear this name I automatically think, "baby killer."

As the story goes, Medea was a sorceress living in what is now the country of Georgia. She has quite an interesting family tree. Medea's father is King Aeetes, her Aunt is the sorceress Circe, and her grandfather is the sun god Helios. She is often depicted as a priestess for Hecate, the goddess of Witchcraft and the dead.

Medea agreed to help Jason retrieve the Golden Fleece on the condition that he marry her. He agreed. Medea used her witchcraft to help Jason complete a series of tasks. She made an unguent and told Jason to rub it on himself and his weapons so that he would be protected from the fire breathing bulls. She warned him that the dragon's teeth turn into warriors when you remove them, and told him that throwing a rock at them will confuse them. She also gave the sleepless dragon a potion of herbs to make him sleep. Medea practically did all the work for him. They were married and bore two children: Mermeros and Pheres. She seems like an innocent heroine in the first part of the story.

Things went well until King Creon offers his daughter Glauce to Jason. Jason accepts. Jason's not so bright. The betrayed Medea sends Glauce a gown and a golden coronet, both laced with poison. This gets rid of Glauce. Medea also kills their two children and flees, and some say that she remarried and had another son. In some early versions of the myth, her killing her children was an accident. This later part of Medea's myth was made into a very famous play by Euripides, which depicts her murdering her children on purpose. This is the generally accepted version of the story.

Because the play is still being performed today, I find it highly unlikely that anyone would be unfamiliar with this story. So imagine my surprise when I read on a message board that they met a little girl with this name. Someone else responded, "That's bold!" Yes, it is! But Medea is actually beloved by some Neo-Pagans. The story may or may not have been based on a real live person. Others see her as a demoted goddess. In Athens, there is evidence of a mother cult in honor of both Hera and Medea that was either in honor of dead children and their grieving mothers or was involved in the ritual sacrifice of children. I'm really hoping it's the former.

If you still like the bold darkness of the name, there are variations of this name, like Media, Medora (which is also the name of two characters in one of my favorite comics Castle Waiting), Medorah, and Madora, which won't have an obvious "baby killer" association. But Medea? For a child? Um...