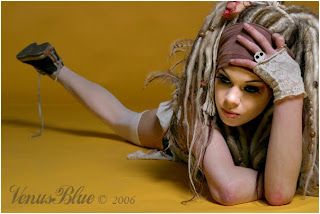 You might be thinking, "Really? Yellow? As a name? Yellow's not a name. It's a color." It is a color, but so is Scarlet and Violet and Gray. Why not use Yellow as a name?

I did actually hear of one person named Yellow. I was watching the Travel Channel when one of the shows featured a guest named Yellow Contractor. I swear, I did not make that up. She's a chef and restaurant owner in India. On the show the host brought up her odd name, and she admitted that her parents were hippies. Naturally, my name radar perked up.

Yellow is a color that symbolizes many positive things. Most people associate it with joy and optimism. In Wicca, yellow is the color for the element of air. It's a masculine element that is in charge of communication and intellect. It's also a color that's associated with the sun, which is very sacred to Neo-Pagans. On the other hand, yellow could also be used as an adjective meaning "cowardly," and it's also an old racial slur for an Asian person. But I doubt that will be any one's first thought.

Well, that's all nice, but most people would still consider Yellow a word, not a name for a person. But that doesn't mean that it will stay that way. Is there anything that could change someone's mind?

The only thing I can come up with is Coldplay's first big hit song. "Yellow" was released in the year 2000 and catapulted them into worldwide fame. The song begins, "Look at the stars/Look how they shine for you/and everything you do/yeah, they were all yellow." It's actually an incredibly sweet love song, and I don't think it's out of the question that someone could name a child after it.

So if you want to use Yellow as a name you can be sure that it will be a conversation starter. I wouldn't worry so much that people would say, "That's not a name!" Remind them that a lot of names that are common now (like Grace and Archer) started as words.