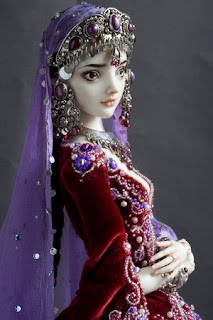 Continuing on with the party, we have a name from the Middle East.

Sherine (pronounced "shuh-REEN" or "SHUH-rin") is a Persian name that means "sweet" or "pleasant." It has many variations including Shereen, Shireen, Sherin, Chirin, and Shirin. The legend of Khosrow and Shirin is a popular Iranian love story. King Khosrow wins the love of Princes Shirin by completing several heroic tasks, and also by conveniently getting rid of his rival Farhad by exiling him from the kingdom.

There is another Sherine in The Witch of Portobello, a novel by Paolo Coelho, although throughout most of the book she goes by Athena. At the beginning of the story, Athena is dead. The book recounts her life through the eyes of several people who knew her.

Athena was born Sherine Khalil to a Gypsy family in Transylvania. She was orphaned and later adopted by a couple in Lebanon. As a child, she has the unique ability to see and communicate with angels and saints. This is also the time when she changes her name. As Athena grows up, she goes on a quest to find herself and eventually comes into contact with Goddess religions. She becomes a controversial spiritual presence in London as, you guessed it, The Witch of Portobello. The book is full of Coelho's trademark mysticism.

You might be thinking, "Why would she feel compelled to change her name? Isn't Sherine exotic enough?" Well, as far as I can tell, it's pretty well used in the Middle East. Same goes for all of it's variations. So, to her, it might have felt like Stephanie. It's not so exotic of you see it everywhere, all the time.

But it would definitely be unique for the United States. And also relatively pronounceable and not all that different from Shannon. Sherine is an exotic appellation that will work no matter what your heritage is.